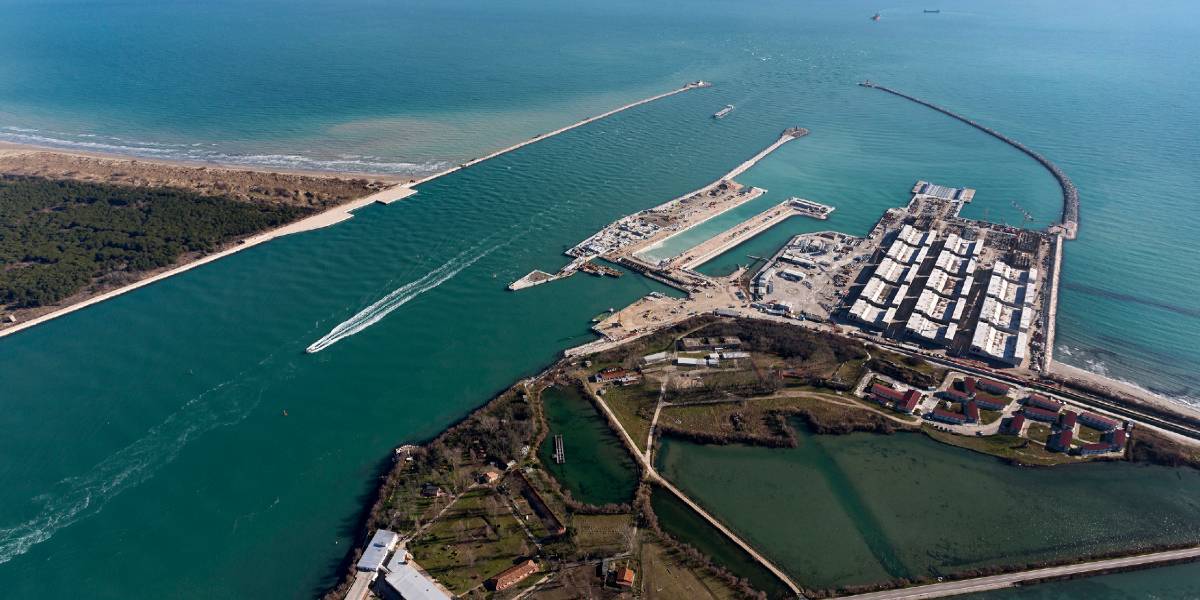 The solution chosen to provide a full response to the complex problem of the high tides involves a combined system of interventions including: temporary closure of all three lagoon inlets by means of a row of mobile gates; local measures to raise shores and banks, compatible with the architectural and socio-economic structure of the individual built-up areas; and wide area morphological measures compatible with the environment to protect against the most frequent flooding.

The works at the lagoon inlets for the defence of Venice and its lagoon from tidal flooding represent one of the largest hydraulic engineering projects of our times.

The preliminary design of these works was performed by Technital 1990-1992, with the co-operation of numerous specialised national and international institutes which, under the designer's co-ordination, carried out innumerable tests on physical models, studies with mathematical models and measurement campaigns.

Following the analysis of the results of the physical and mathematical model tests and of those derived from monitoring the full-size prototype of a flap-gate, the MO.S.E. (MOdulo Sperimentale Elettromeccanico -Electromechanical Experimental Module). the buoyancy flap-gates, the "heart" of the system, were designed.

The definition of the functional and structural dimensions, the selection and scaling of special components and of the corrosion protection system, and the definition of the tolerances on the basis of the construction methods to be used were performed separately for each inlet.

The optimal solution to solve this problem, as identified by the Preliminary and Basic Design phase, is the construction of four fixed barriers with buoyancy flap-gates, two at the Lido mouth, one at the Malamocco mouth and one at the Chioggia mouth, with the following dimensions:

Width Depth No. of gates

Each flap-gate will consist of a rectangular metal caisson, 20 metres wide, 4 metres high and of variable length depending on the depth of the canal.

The inlets remain closed for the duration of the high water only and for the time required to manoeuvre the gates (on average, a total of four and a half hours). The feasibility and effectiveness of the proposed solution have been studied during years of tests on mathematical and physical models with the contribution and control of leading hydraulic model laboratories.

The four sets of buoyancy flap-gates, with an overall length of almost two kilometres, will be anchored to pre-cast concrete foundation caissons floated to the site place and laid in special trenches, and will be raised by the introduction of compressed air during exceptional tidal conditions to prevent the lagoon from flooding.

Refuge basins, with navigation locks for small and medium sized craft, will allow the harbouring and transit of marine traffic even when the flap-gates are raised.  The design of these refuge basins and their connection with the mobile works and that of the locks for small craft involved, in addition to the hydrodynamic and wave motion model studies and the traditional dimensioning, the use of models for simulating the successive arrival of craft and models for the access and evolution manoeuvres within the internal basins.

The dimensions of the principal structures of the barrier were then defined: these include the flap-gate housings, the fixed works on either side of the barriers and the control building.  Since these are the only above-ground structures of the complex, a special study was carried out for their insertion in the environment resulting in the definition of singular architectural solutions for the buildings, compatible with local morphology and the historical tradition of the city.

By means of mathematical solutions of the problems of building-ground interaction, the related settlements and the safety coefficients for various alternative solutions, a type of foundation was selected consisting of caissons pre-cast off-site and sunk in situ with flexible watertight joints.

The design of the bottom protection, the auxiliary technical plants and the study of the most suitable realisation stages in relation to the construction methods and to minimal interference with the anthropic activities concluded the design activities.