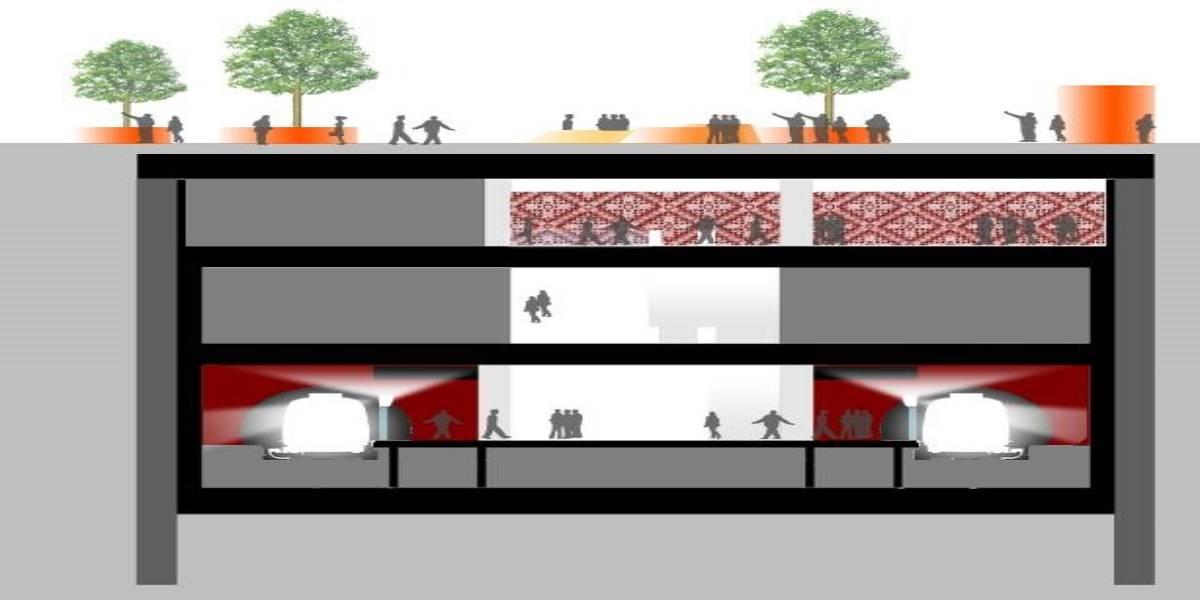 The project concerned a first functional section of the metropolitan light railway of Palermo, running in a north-south direction across the central city area, from the intersection of Oreto and the ring road (Viale della Regione Siciliana) to the Notarbartolo railway station, for a total length of 6.5 km, plus a 0.5 km link to the depot. The line section includes 9 stations which are (south-north): Svincolo Oreto, Oreto Sud, Oreto Nord, Giulio Cesare, Borsa, Massimo, Politeama, Archimede, Notarbartolo.

The horizontal and vertical layout of the line had to take into consideration the restrictions imposed by the existing buildings, the reality of the site concerned and the compatibility of the future extension of the line towards Mondello by two routes, via Notarbartolo or via Gentili and the Stadium, as well as the normal requirements of an automatic metropolitan railway system.

The line features include a maximum longitudinal gradient of 4%, a horizontal curve radius ranging from a minimum of 200 m, to a maximum of 600 m, and maximum rail depth below ground of 32 m.

Nine intermediate ventilation wells are foreseen, located between stations, which serve to provide normal operation and emergency ventilation, and also for draining water from the line in the sections between stations with minimum levels. There will also be two accesses from the ground level, one for the operator and the other (separate) one to allow access to the line by firemen in the event of an emergency, as required by law.

Most of the line will have a double barrel tunnel section, each with a single track and a circular section, achieved by tunnelling using a shielded full-section cutter. Only the first stretch, between the depot and the Svincolo Oreto station, and the last section of the switch area for the inversion of the trains, located after the Notarbartolo station and just before the end of the first functional line section, will have a double track single-barrel, cut and cover tunnel with a rectangular section, made with r.c. diaphragms.

The circular section single-track tunnel has a maximum diameter of 5.3 m (Ansaldo system) and a minimum diameter of 4.7 m (VAL system), according to the rolling stock adopted.

The project includes a workshop and depot area of 96,464 m2, initially for 16 trains, and subsequently capable of handling up to 40 trains. This area will serve as a depot for the trains when not in operations, for their inspection, maintenance and cleaning, and also for their repair and technical revision.

All stations are below ground with a central platform, with the exception of Svincolo Oreto which has lateral platforms, and Archimede which has overlying platforms, and a minimum of two accesses to above ground according to the current standards.  The stations of Oreto Sud, Giulio Cesare, Politeama and Notarbartolo have a standard rectangular plan and a central island, and are built by the top down system, on three levels, entrance hall, mezzanine floor and train level.

The other stations - Oreto, Oreto Nord, Borsa, Massimo and Archimede are all special.

For example, the station of Svincolo Oreto has a rectangular plan with lateral platforms, but also has a trapezoidal-shaped extension, towards Notarbartolo, to create a space between the lines to allow the lowering of the two mechanized shields for boring the circular tunnels in safe conditions. This station has only two levels: the entrance hall and the train level.

The station of Oreto Nord. thanks to the limited width of the street (via Perez) where it is located, is long and narrow, with stairs linking the entrance hall to the train level and the plant areas, and two tunnels (one for each track) realized with traditional tunnelling methods and connected by corridors to station “box”.

Le stations of Borsa and Massimo, have an almost square plan owing to the particular environmental constraints, achieved by top down excavation, which includes the entrance hall, the stairs/escalators to the train level, the technological plants and part of the platform. The rest of the platform length will be served by two polycentric section tunnels realized by traditional methods.

The station of Archimede, which will also be the interchange structure for connection to future lines, has overlying platforms owing to the limited space available for their location.