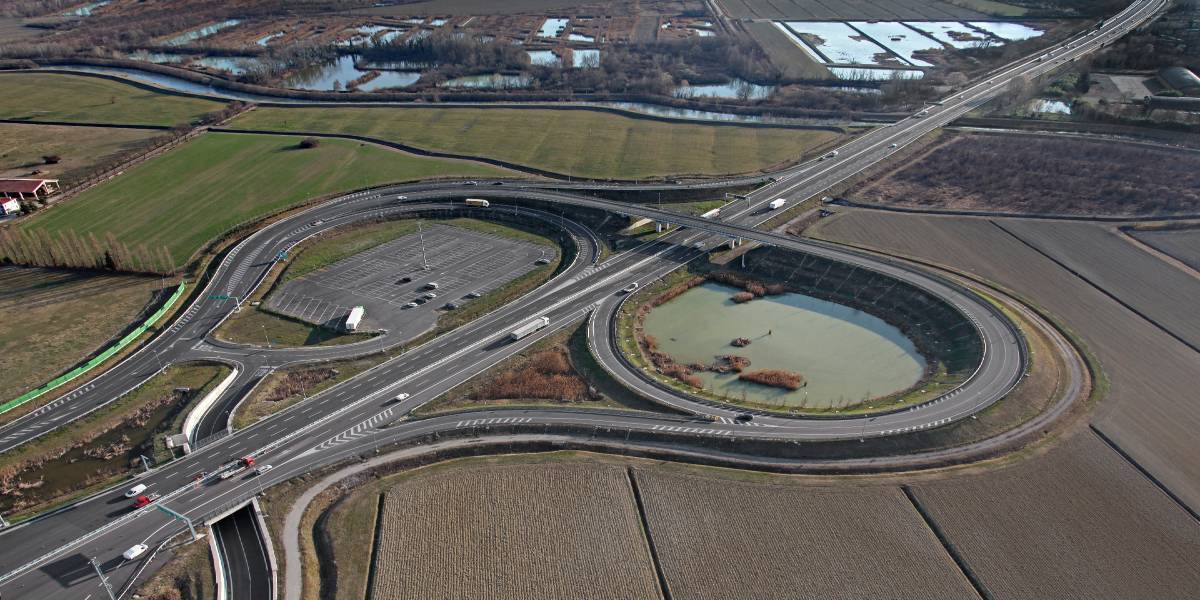 The Preliminary Design was drawn up by the Regione Veneto in 1997. Subsequently TECHNITAL was charged with the execution of the final and detailed designs of a section of motorway to connect the two existing sections of the A4 motorway (Turin-Trieste), at present divided by the Mestre bypass.

The alignment runs from the A4 at the Dolo toll barrier, passing through Spinea, Martellago and Preganziol, to link up with the A4 again at the Quarto d’Altino toll barrier, with an intermediate section along the A27 motorway Mestre-Belluno, north of the Mogliano Veneto barrier, for a total length of 32.3 km. It is a dual carriageway motorway with 3 lanes each way, 3.75 m in width, and an emergency lane 3 m wide. The cross section is therefore of Category A for extra-urban motorways, with a total width of 32.5 m. The new motorway stretch envisages 3 intermediate toll barriers (at Spinea, Mogliano, and one between Preganziol and Casale sul Sile).

The most significant works are the 8 sections in cuttings, seven of which covered, for a total of 10.5 km, four viaducts for over 1.5 km, fifteen river crossings with single-span bridges, thirteen overpasses and nineteen underpasses. The hydraulic works are considerable, in relation to the highly varied territory crossed. Besides these motorway works, affecting the urban areas of the Veneto Region, and in particular the provinces of Padua, Treviso and Trieste, the project involved other important works affecting the secondary road network and aimed at re-organizing and improving circulation in general.

The Special Commission for Environmental Impact Assessment of the Ministry of the Environment and the Ministry for the Public Patrimony both issued a series of specifications and recommendations in relation to the Preliminary Design, which were incorporated into the formal approval by CIPE on instruction from the Ministry of Infrastructure and Transport. The final design prepared by TECHNITAL therefore included a detailed study of these new requisites and also developed new themes not previously discussed.

For the environmental impact study, one of the most important elements was the study of the direct and indirect effects of the motorway on the hydrographical and reclamation systems of the basins crossed. It also included the verification of the innovative criteria for re-naturalizing the water courses and reconstructing wetlands to serve as filters for the ecosystem and dissipate floods. The main objectives were:

Special attention was paid to the final design of the variation of horizontal and vertical alignment in the municipalities of Salzano and Martellago, a stretch of little more than 4 km, where it had to be moved further south-east to limit the interference with the SIC (Sites of Communal Interest) “former Quarry of Villetta di Salzano”, closer to the municipality of Martellago. The new alignment was located in a fairly narrow corridor bounded by this site and the existing buildings, practically on the edge of the area itself. Specific environmental impact studies were carried out for the protection of the flora and fauna of the SIC and ZPS (Special Protected Zones). On the basis of the methodology proposed by the Veneto Region the following 4 levels of evaluation were to be carried out at depth: Level I (screening, also in relation to the setting up of construction sites; Level II (suitable evaluation of the incidence of the project on the integrity of the site), Level III (evaluation of the alternative solutions) and Level IV (compensating measures). A special evaluation study was made with regard to the built-up areas, which are more heavily affected with respect to the preceding alignment solution for the motorway.